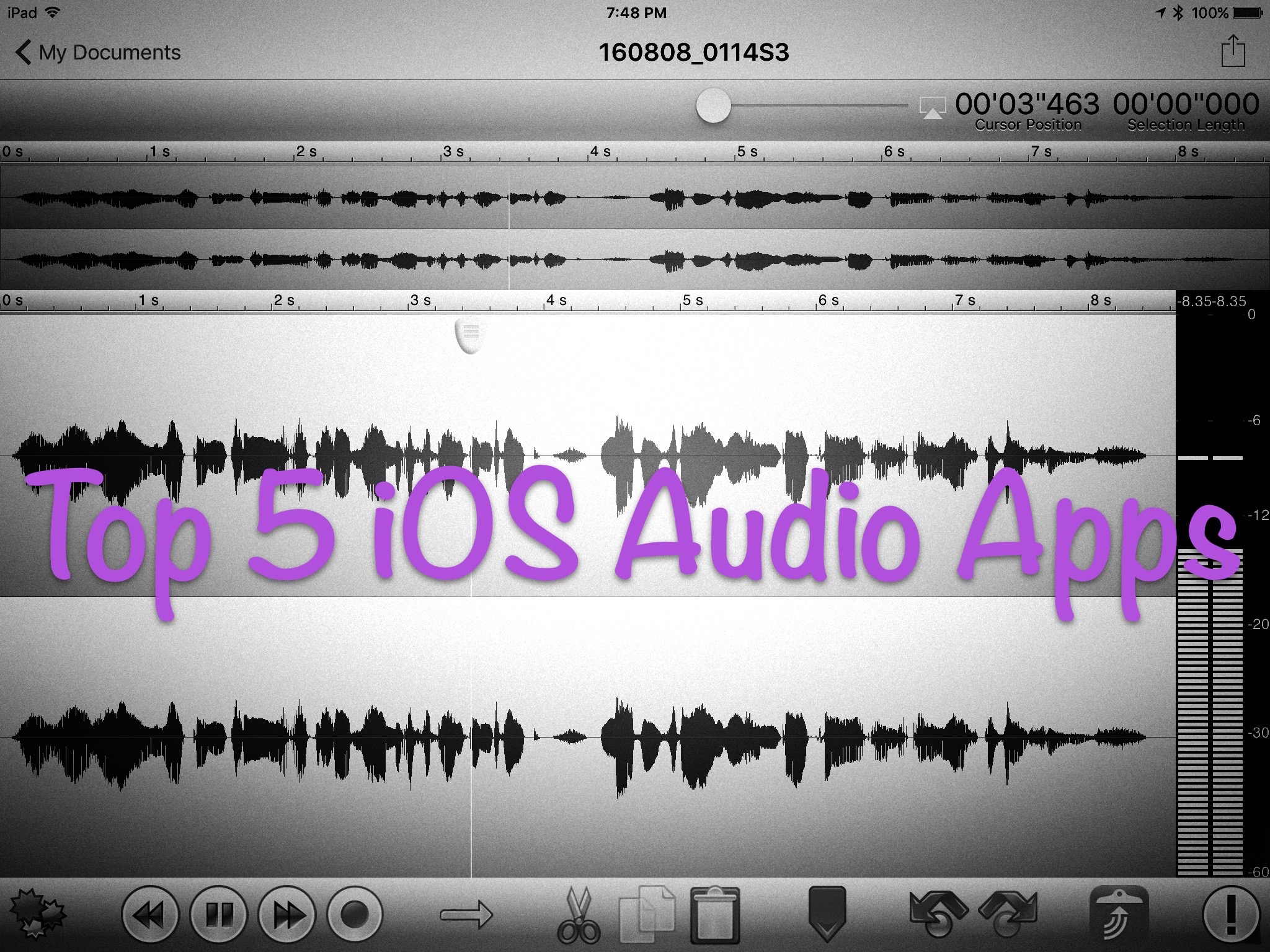 More and more podcasters and musicians are taking their craft on the road and are looking for ways to downsize their required packing. The question that keeps coming up is how does one record a podcast using an iOS device, or how does anyone who works with audio edit their media and get it exported, how does one publish that media out to the world, and how does one do this without a computer.

It use to be that a good DAW or system for recording required money, work, big software. That isn’t necessarily true anymore, with phones and tablets shipping with powerful processors and more and more RAM, app developers have more to work with in order to build more fully featured apps that give us audio people the tools we need in small packages.

To me, anything I can do on the go, especially on my iPhone or my iPad, makes me happy. Considering how many ask me this very question, I can only assume the ability to do these things in small packages makes many of you happy people also!

So without further á deux, I present to you my absolute favorite five audio apps for iOS.

Ferrite is a beautiful DAW made for iOS. It supports multitrack, has many applicable filters and effects, cut and paste, and other very easy and intuitive features that make this one of my favorite DAWs for mobile.

It even offers support for generating ID3 tags with artwork (something many DAWs, even on desktops, don’t support).

When I first saw Ferrite, after years of using TwistedWave (which I do love), I thought the interface was so much more streamlined, easier on the eyes, much more modern. But… it has a fault.

This is where apps like iConv (listed below) come in really handy. It means I can use this DAW all day long, and still use iConv to export as an MP3 because despite any argument over whether or not M4A is better, MP3 still has the best and most widespread compatibility for online audio (especially for podcasts).

I still recommend this app, I still love this app, but it is important to note it’s lack of MP3 functionality and the need for something like iConv, Workflow, or some other option that can handle that conversation for you.

Twisted Wave is an audio editor available for Mac, iPhone, iPad, and via a browser based solution. It isn’t the prettiest solution by any stretch, but it is incredibly easy to use and gets the job done.

This app offers recording capability, though to be honest, I never use it. I use Twisted Wave for it’s editing and exporting capabilities. That said, it supports 16-bit and 32-bit, low latency recording, and even bluetooth recording support.

One of the things I love about Twisted Wave is the ability to ingest audio everything I’d ever use. iTunes file sharing, Dropbox, Box.com, and of course iCloud support are all available.

Twisted Wave offers plenty of editing filters, including amplification, normalization, fading, reverb, delay, pitch, dynamic equalizers, parametric EQ, mono/stereo conversion, and many other options. It is very easy to cut, paste, add in silence, and all those things any happy podcaster would want for entering ad slots, intros, or outros.

Exports aren’t only easy, but there is a wide range of formats the app supports including WAV, AIFF, CAF, AAC/M4A, Apple Lossless M4A, FLAC, and MP3. You can also customize your bit rate. The file can be saved just about anywhere, including iCloud, Dropbox, Box, iTunes file share, e-mail, FTP/SFTP, even Soundcloud.

I’ve personally used Twisted Wave for many years. While they offer several options, I’ve only ever used their app, but it is a fantastic solution for on the go editing and exporting.

Bossjock is the ultimate podcaster studio in an app. Originally created by one of the founders of the longest running podcasting hosts around (Libsyn – full disclosure, my full time gig is with Libsyn), Bossjock is an app made by podcasters and for podcasters.

The app is centered around the idea of carts. Additional audio pieces can be loaded into each cart, and each cart can be individually configured with ducking, fading, overall volume, and so on. Arrange the carts as you want for your show, then start recording.

Of course, the app will also record via a microphone, working with just about any microphone for iPhones/iPads, as you record voice, you can then select a cart to play allowing easy dispersement of intros, outtros, ads, pre-recorded interviews, sound affects, whatever you can dream up.

Using the Apple lightening to USB adapter (commonly called the camera kit), most USB microphones, such as the Audio Technica ATR-2100, can be easily connected for a truly portable podcasting studio.

While the app currently doesn’t support editing (though easy export to other DAWs is possible), you can take your recording and publish it directly to several locations, or use the built in FTP function to upload to any host allowing for FTP (including Libsyn). You can export in mp3, m4a, wav, or aiff.

As a podcaster, often times we want to splice in additional audio into our show. This might be an intro, an outro, a certain sound affect, an ad from a sponsor, whatever you can think of.

Radio stations do this using cart machines, hardware configured with specific audio pieces that are spliced in when the button is hit by the producer.

I don’t know about you, but I have no interest in spending that kind of money on a machine my iPad can do with a decent piece of software!

There have been several cart apps, and this is one of two that have cart options available. The previous cart app I used was also… aptly named… Soundboard, but unfortunately that app didn’t keep up with the times and has issues with compatibility with newer versions of iOS.

So I bring you… Soundboard. This app makes it silly easy to import audio files, associate them with different soundboards, setup fade options, and other options.

The one downside to this app is it comes at a steep price for what it does. Don’t get me wrong, it’s a nice app and one that I will use often, but it comes with a price tag of $29.99.

IConv is one of my favorite iPad apps… period… for media producers of any kind. It allows the ingestion of video or audio files to convert to a range of different formats.

This is particularly helpful if you need to, for example, reduce the file size of a video file, or convert an M4A audio file over to MP3.

To bring this full circle, one of my favorite audio editing apps for the iPad happens to be Ferrite (mentioned above). However, to date, Ferrite does not offer an option to export as an MP3 (I’ve already discussed this with the developer, I’ll just say I didn’t get very far). However, I can export it as a raw WAV file, import it into iConv, and easily convert it to an mp3 with a bit rate and frequency of my own choosing.

If you ask me, if you do any media production at all on your iOS devices, you must have iConv in your toolbox.

The old argument continues to be made that tablets, especially iPads, are consumption devices. That you can’t do real work on an iPad.

I call malarkey. You can actually do a lot of real work on an iPad. That is why my on the go device to get work done is now an iPad, with keyboard, and the ability to record on the go.

If you liked learning about a few of the several rockin’ (and not insanely expensive) audio apps available for iOS, check out my article on my favorite video apps also for iOS. Got a new iPad Pro? Do you do a lot of video work? I can tell you the iPad Pro packs a lot of bang for video processing also.

This post contains affiliate links, which means that if you click on one of the product links and make a purchase, a percentage of that purchase goes back to Greenacres Media & Technology, LLC. GM&T is a privately owned company who provides reviews and education based solely on merit as seen through our testing and use of these products. 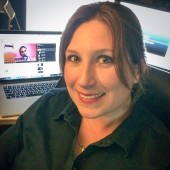 Krystal O'Connor is obsessed with new media and technology, particularly podcasting and mobile. She has a degree in Computer Systems & Network Technology and over 18 years of experience across web based technologies, hosting, and podcasting.

We use cookies to ensure that we give you the best experience on our website. If you continue to use this site we will assume that you are happy to receive all cookies on this website.OkRead more